Galane Gold Ltd. Releases an Updated Technical Report for Its Galaxy Property and Announces a Gold Measured Plus Indicated Resource of 970,904 Ounces and an Inferred Resource of 1,409,764 Ounces: a Total 60% Increase From Its Previous Resource Statement

TORONTO, ONTARIO – July 6, 2020: Galane Gold Ltd. (“Galane Gold” or the “Company”) (TSX-V: GG; OTCQB: GGGOF) is pleased to announce the release of an independent updated National Instrument 43-101 (“NI 43-101”) technical report supporting the positive preliminary economic assessment (“PEA”) for its currently operating Galaxy property (the “Mine”) in South Africa (the “Technical Report”). Unless otherwise indicated, all references to “$” in this press release refer to United States dollars.

Galane Gold CEO, Nick Brodie commented: “We believe that our new independent technical report confirms that we have a ‘generational’ asset with the potential for further expansion in resource, throughput, and mine life with minimal capital requirement and robust ongoing economics.

The decision to undertake a new technical report was made so that we could advise the market on the actual potential of Galaxy and how we plan to expand the current operation. Given our progress to date at Galaxy in the Phase 1 ramp up to approximately 26,000 ounces per annum, generation of positive cash flows (as announced on November 15, 2019) at Galaxy, and upgrade of the plant, we expect to make a decision in the near future to implement the Phase 2 growth plan to target production of over 50,000 ounces per annum.(3)

The Galaxy mine camp currently hosts 21 known mineralised zones and we continue our expansion objectives, by first implementing our Phase 3 expansion plan. We have thus far increased our compliant resource by concentrating on data already available for the three existing orebodies we have been targeting, and improving the economics on those orebodies. We will now start the same process on the remaining 18 mineralised zones. In addition, we will start a drilling campaign to prove extension of the mineralised zones at depth. We are optimistic that we can present a plan to double production again once we have proved the resource to support the data.”(3)

The Technical Report entitled “NI 43-101 Technical Report on the Galaxy Gold Mine, South Africa” was issued on July 3, 2020, with an effective date of June 29, 2020. The Technical Report was prepared by Minxcon (Pty) Ltd and approved by Mr. Uwe Engelmann, BSc (Zoo. & Bot.), BSc Hons (Geol.) Pr.Sci.Nat., MGSSA, and Mr. Daniel (Daan) van Heerden, B Eng (Min.), MCom (Bus. Admin.), MMC, Pr.Eng., FSAIMM, AMMSA, both “qualified persons” as defined by NI 43-101, and independent of the Company for the purposes of NI 43-101. A copy of the Technical Report will be available under the Company’s profile on www.sedar.com, and on the Company’s website on www.galanegold.com.

The Mineral Resources have been reviewed and updated as follows:

A new life of mine (“LoM”) plan was created with mining plans produced around the newly delineated resources.  The mining strategy is to produce a concentrate with a grade greater than 25 g/t from the Princeton, Galaxy, Woodbine and Giles orebodies. For the PEA, the cut-off grades were used instead of pay-limits. A mine stope optimiser (“MSO”) was used to generate optimal stope configurations for mining the Galaxy, Princeton, Woodbine and Giles orebodies. The MSO uses a block model of the resource and applies a set of user defined criteria including minimum stope dimensions and economic parameters to identify the most profitable regions within the resource. The optimisation generates stope wireframes which were used for the mine designs.

The stope optimiser results were analysed at a range of cut-off grades for each orebody to determine at what cut-offs the correct mix of tonnes and grade are obtained to satisfy the mining strategy and provide sufficient LoM.

The processing plant was recommissioned in April 2019 and is producing and selling a gold flotation concentrate. The plant consists of crushing, milling, flotation and concentrate filtration circuits. The existing infrastructure was used for as long possible, with crucial expansions and refurbishments completed in order to meet the interim production target of 15 ktpm. Further expansions have already commenced to meet the 30 ktpm (for Phase 1, 26,000 ounces per annum) and then eventually the 50 ktpm (for Phase 2, over 50,000 ounces per annum) production targets.(3) A new ball mill with a capacity of 50 ktpm is being built and is due to be commissioned. Once this has been completed the only constraint to meeting the 50 ktpm target will be upgrading the float capacity from its current limit of 30 ktpm.

The metallurgical recoveries of the various orebodies are well known from both historic production and current production.

With this information the following production schedule for the PEA was created: 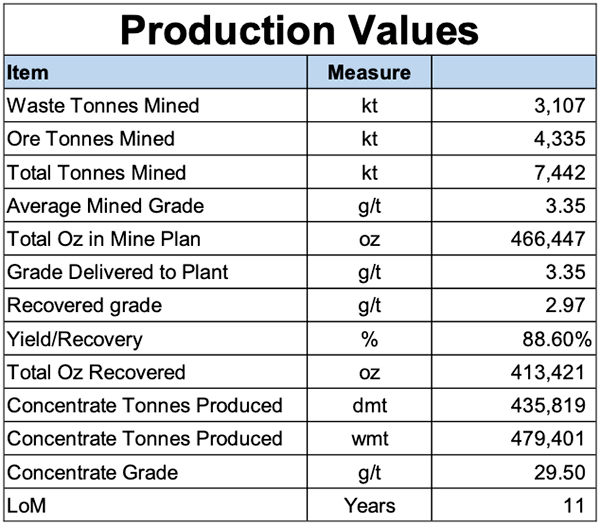 Galane Gold is an un-hedged gold producer and explorer with mining operations and exploration tenements in Botswana and South Africa. Galane Gold is a public company and its shares are quoted on the TSX Venture Exchange under the symbol “GG” and the OTCQB under the symbol “GGGOF”. Galane Gold’s management team is comprised of senior mining professionals with extensive experience in managing mining and processing operations and large-scale exploration programmes. Galane Gold is committed to operating at world-class standards and is focused on the safety of its employees, respecting the environment, and contributing to the communities in which it operates.

(3) This is forward-looking information and is based on a number of assumptions. See “Cautionary Notes”.

Certain statements contained in this press release constitute “forward-looking statements”. All statements other than statements of historical fact contained in this press release, including, without limitation, those regarding the Company’s future expansion at the Mine, capital requirements for such expansion, mining strategies at the Mine, technical, financial and business prospects of the Company, future financial position and results of operations, strategy, proposed acquisitions, plans, objectives, goals and targets, and any statements preceded by, followed by or that include the words “believe”, “expect”, “aim”, “intend”, “plan”, “continue”, “will”, “may”, “would”, “anticipate”, “estimate”, “forecast”, “predict”, “project”, “seek”, “should” or similar expressions or the negative thereof, are forward-looking statements. These statements are not historical facts but instead represent only the Company’s expectations, estimates and projections regarding future events. These statements are not guarantees of future performance and involve assumptions, risks and uncertainties that are difficult to predict. Therefore, actual results may differ materially from what is expressed, implied or forecasted in such forward-looking statements.

Additional factors that could cause actual results, performance or achievements to differ materially include, but are not limited to: the Company’s dependence on two mineral projects; gold price volatility; risks associated with the conduct of the Company’s mining activities in Botswana and South Africa; regulatory, consent or permitting delays; risks relating to the Company’s exploration, development and mining activities being situated in Botswana and South Africa; risks relating to reliance on the Company’s management team and outside contractors; risks regarding mineral resources and reserves; the Company’s inability to obtain insurance to cover all risks, on a commercially reasonable basis or at all; currency fluctuations; risks regarding the failure to generate sufficient cash flow from operations; risks relating to project financing and equity issuances; risks arising from the Company’s fair value estimates with respect to the carrying amount of mineral interests; mining tax regimes; risks arising from holding derivative instruments; the Company’s need to replace reserves depleted by production; risks and unknowns inherent in all mining projects, including the inaccuracy of reserves and resources, metallurgical recoveries and capital and operating costs of such projects; contests over title to properties, particularly title to undeveloped properties; laws and regulations governing the environment, health and safety; the ability of the communities in which the Company operates to manage and cope with the implications of COVID-19; the economic and financial implications of COVID-19 to the Company; operating or technical difficulties in connection with mining or development activities; lack of infrastructure; employee relations, labour unrest or unavailability; health risks in Africa; the Company’s interactions with surrounding communities and artisanal miners; the Company’s ability to successfully integrate acquired assets; risks related to restarting production; the speculative nature of exploration and development, including the risks of diminishing quantities or grades of reserves; development of the Company’s exploration properties into commercially viable mines; stock market volatility; conflicts of interest among certain directors and officers; lack of liquidity for shareholders of the Company; risks related to the market perception of junior gold companies; and litigation risk. Management provides forward-looking statements because it believes they provide useful information to investors when considering their investment objectives and cautions investors not to place undue reliance on forward-looking information. Consequently, all of the forward-looking statements made in this press release are qualified by these cautionary statements and other cautionary statements or factors contained herein, and there can be no assurance that the actual results or developments will be realized or, even if substantially realized, that they will have the expected consequences to, or effects on, the Company. These forward-looking statements are made as of the date of this press release and the Company assumes no obligation to update or revise them to reflect subsequent information, events or circumstances or otherwise, except as required by law.

Information of a technical and scientific nature that forms the basis of the disclosure in the press release has been prepared and approved by Kevin Crossling Pr. Sci. Nat., MAusIMM. and Business Development Manager for Galane Gold, and a “qualified person” as defined by NI 43-101. Mr. Crossling has verified the technical and scientific data disclosed herein and has conducted appropriate verification on the underlying data.