TORONTO, ONTARIO – May 1, 2018: Galane Gold Ltd. ("Galane Gold" or the "Company") (TSX-V:GG) is pleased to announce additional positive exploration results as the Company continues to delineate the extension of Tau at depth.(1)

On October 24, 2016, the Company issued a press release with regards to the structurally displaced mineralised zone referred to as the “C Reef” which represents a potential extension of Tau at depth.  The C Reef mineralization characteristics are similar to those of the main Tau body; being a “disseminated style? in well bedded, silicified quartz rich parts of the graphitic iron formation.  The C Reef can be subdivided into two distinct geological domains - the west domain, which consists of a narrow high grade mineralized zone, and the eastern domain, which is a wider zone with an average grade similar to that of the main Tau body based on metallurgical test work conducted by the Company at the Mupane metallurgical laboratory.

In addition, further reviews of the historical data revealed that the C reef lithology associated with the wider eastern geological domain was intersected in two RC holes drilled in mid-2007 as part of the original Tau Deeps exploration program by the former owner IAMGOLD.(2) The lithology intersections were at a vertical depth of 360 meters below surface, equivalent to mining level 580RL; which is 80 vertical meters below the current deepest planned mining level at Tau. The assay results are missing from the database and the Company is currently reviewing alternatives to obtaining the results.

Below is a graphical representation of our current understanding of the C reef extension at depth. The exploration is continuing to further refine this view and add further life to the underground.(3) 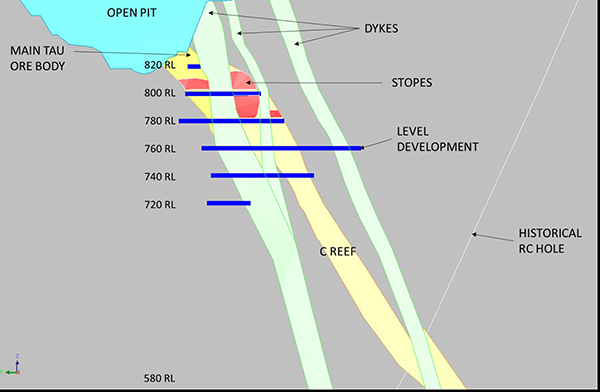 Galane Gold CEO, Nick Brodie commented: "The decision to move to underground operations has been further supported as the exploration results continue to support our view on the extension of the Tau mineralized body at depth.(3) I believe we can now be more than confident in saying that Tau is expected to form the backbone of our operation past our current 4 year mine plan."(3)

Galane Gold is an un-hedged gold producer and explorer with mining operations and exploration tenements in Botswana and South Africa. Galane Gold is a public company and its shares are quoted on the TSX Venture Exchange under the symbol “GG”.  Galane Gold’s management team is comprised of senior mining professionals with extensive experience in managing mining and processing operations and large-scale exploration programmes. Galane Gold is committed to operating at world-class standards and is focused on the safety of its employees, respecting the environment, and contributing to the communities in which it operates.

Certain statements contained in this press release constitute “forward-looking statements”. All statements other than statements of historical fact contained in this press release, including, without limitation, those regarding the Company’s future financial position and results of operations, strategy, proposed acquisitions, plans, objectives, goals and targets, and any statements preceded by, followed by or that include the words “believe”, “expect”, “aim”, “intend”, “plan”, “continue”, “will”, “may”, “would”, “anticipate”, “estimate”, “forecast”, “predict”, “project”, “seek”, “should” or similar expressions or the negative thereof, are forward-looking statements. These statements are not historical facts but instead represent only the Company’s expectations, estimates and projections regarding future events. These statements are not guarantees of future performance and involve assumptions, risks and uncertainties that are difficult to predict. Therefore, actual results may differ materially from what is expressed, implied or forecasted in such forward-looking statements.

Additional factors that could cause actual results, performance or achievements to differ materially include, but are not limited to: the Company’s dependence on two mineral projects; gold price volatility; risks associated with the conduct of the Company’s mining activities in Botswana and South Africa; regulatory, consent or permitting delays; risks relating to the Company’s exploration, development and mining activities being situated in Botswana and South Africa; risks relating to reliance on the Company’s management team and outside contractors; risks regarding mineral resources and reserves; the Company’s inability to obtain insurance to cover all risks, on a commercially reasonable basis or at all; currency fluctuations; risks regarding the failure to generate sufficient cash flow from operations; risks relating to project financing and equity issuances; risks arising from the Company’s fair value estimates with respect to the carrying amount of mineral interests; mining tax regimes;  risks arising from holding derivative instruments; the Company’s need to replace reserves depleted by production; risks and unknowns inherent in all mining projects, including the inaccuracy of reserves and resources, metallurgical recoveries and capital and operating costs of such projects; contests over title to properties, particularly title to undeveloped properties; laws and regulations governing the environment, health and safety; operating or technical difficulties in connection with mining or development activities; lack of infrastructure; employee relations, labour unrest or unavailability; health risks in Africa; the Company’s interactions with surrounding communities and artisanal miners; the Company’s ability to successfully integrate acquired assets; risks related to restarting production; the speculative nature of exploration and development, including the risks of diminishing quantities or grades of reserves; development of the Company’s exploration properties into commercially viable mines; stock market volatility; conflicts of interest among certain directors and officers; lack of liquidity for shareholders of the Company; risks related to the market perception of junior gold companies; and litigation risk. Management provides forward-looking statements because it believes they provide useful information to investors when considering their investment objectives and cautions investors not to place undue reliance on forward-looking information. Consequently, all of the forward-looking statements made in this press release are qualified by these cautionary statements and other cautionary statements or factors contained herein, and there can be no assurance that the actual results or developments will be realized or, even if substantially realized, that they will have the expected consequences to, or effects on, the Company. These forward-looking statements are made as of the date of this press release and the Company assumes no obligation to update or revise them to reflect subsequent information, events or circumstances or otherwise, except as required by law.

Whole core sampling was conducted in 0.5 meter intervals. All samples were bagged in sealed plastic bags which were sent for analysis at Mupane’s laboratory. Sample preparation was as follows:

All samples were analyzed for gold by fire assay

Information of a technical and scientific nature that forms the basis of the disclosure in the press release has been approved by Kevin Crossling Pr. Sci. Nat., MAusIMM, SACNASP and Business Development Manager for Galane Gold, and a “qualified person” as defined by National Instrument 43-101.